When web developers talk about the web today they often discuss topics around web performance optimization (WPO). Nowadays it’s an even more important topic, since we use the browser for almost any type of application with many different devices and different connection types from all over the world. It’s a complex environment where dozens of lines of code get written and executed. Companies like Amazon and eBay have huge decreases in revenue when their site loading times increase. In 2008, Amazon reported that they approximately lose 1% of revenue for every 100 ms increase in loading time, which when we think about the revenues of Amazon in 2015 (107 billion dollar a year) would imply a loss of 1.07 billion dollar a year.

And that’s by far not everything. In a recent talk given by one of the head Opera developers, Bruce Lawson mentioned that more users and devices will hit the WWW: Emerging markets like Africa and India are growing fast. He predicts that we will have roughly 3 billion more users using the WWW in the next 50 years and that they will come from emerging markets. They will not connect to the internet with a high end desktop computer, they will start using the internet with a low budget smartphone, with slow internet connections and low processing capabilities. These markets will eventually be our next customers, and therefore we need to emphasise the need of performance, so that everybody is able to use our web applications no matter their device or internet connection quality!

In this blog series I want to discuss what web performance is, how to look at it from a user-centric perspective and show which kind of optimization techniques we can use to make our web applications faster.

First, let’s start this series by showing the limits of web performance optimization to increase awareness for measurement parameters like seconds (sec) and milliseconds (ms).

For many developers web performance is all about optimizing the back- and frontend to speed up loading time and to deliver a fast and snappy web application, but if you take a wider look at this topic, you will see that there are underlying theoretical and physical limitations. Knowing these limits is a core value for web developers. Knowing them we can treat performance with a higher value and see whether further optimizations make sense and are going in the right direction.

Ilya Grigorik, one of the Google performance gurus, shows in his book “High Performance Browser Networking” an interesting table about how the signal latencies in a vacuum and in fiber cables of different lengths are affecting speed: The speed of light is the maximum speed at which all energy and information can travel. The speed of light is fast, really fast and indeed you can travel around the earth with the speed of light in around 133.7 ms with 299,792,458 meters per second. That’s the theoretical limit which Einstein has mentioned in his theory of special relativity, but if we think about web technologies today we always have different factors which limit the maximum speed, so when we use a fiber cable and send a network packet through it we have a roughly 1.4-1.6 times slower connection than theoretically possible. We replicated a table from Ilya’s book using inovex office locations.

So what is this all about? Studies have shown that a web application should load content in 1000 ms and respond to input in 100 ms, otherwise users will get distracted and perform a mental context switch. We will discuss these suggestions and user centric-performance models like the RAIL paradigm from Google in upcoming articles, but for now just take these time limits and think about the situation when we send network packets over a fiber cable connection from inovex Karlsruhe to a server located in Sydney. The theoretical round trip time (RTT) is around 165 ms but that is not a realistic value. In reality there are a lot more bottlenecks to take into account (e.g we calculated with direct flight distances but cables are not going straight from one place to another). A more realistic value considering this would be 300 ms, which is still a really optimistic value.

You can try that for yourself using your internet connection. I just googled Australia and the first hit was the Australian Government website. So I looked up the server location via https://geoiptool.com: 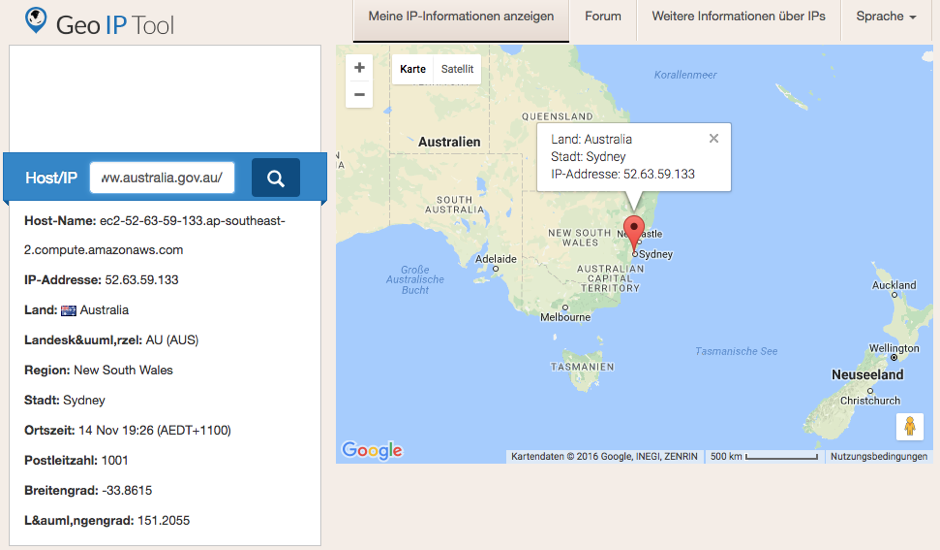 Finally I used the terminal to ping that location several times. The result was an average RTT of 304 ms:

When we now take a closer look at these values and take into account suggestions from user studies mentioned above, we see that to hit these limits we cannot make the packets travel faster, since the finite speed of light limits the theoretical maximum of speed, but we have various other optimization techniques to improve RTT, such as content delivery networks (CDNs), where we ship content to a nearby location, so that the latencies will decrease.

Most web applications need a lot longer than a hundred-something milliseconds to load. So keep in mind when you talk about improving your application in the range of milliseconds you already have a really fast application, but when your site loads in e.g. 15 seconds you have much room for improvement. Thinking in milliseconds is a good idea since you see that an improvement of 100 ms can matter a lot.

In the upcoming articles we will explore why these limits are relevant, but you still don’t need to worry about them too much. We will even talk about situations when your applications are getting too fast, messing with people’s psychological awareness of time.

With that in mind let’s finish this article with a summary. Here are the key takeaways:

Don’t want to get your hands dirty? Our developers have years of experience in developing mobile and web applications. Visit our website for a full portfolio, ask for a quotation at list-blog@inovex.de or call +49 721 619 021-0.

Looking for new challenges in web development? Join us as web-frontend or software developer!

This is the third article of our blog post series about Deep Learning for mobile devices. The