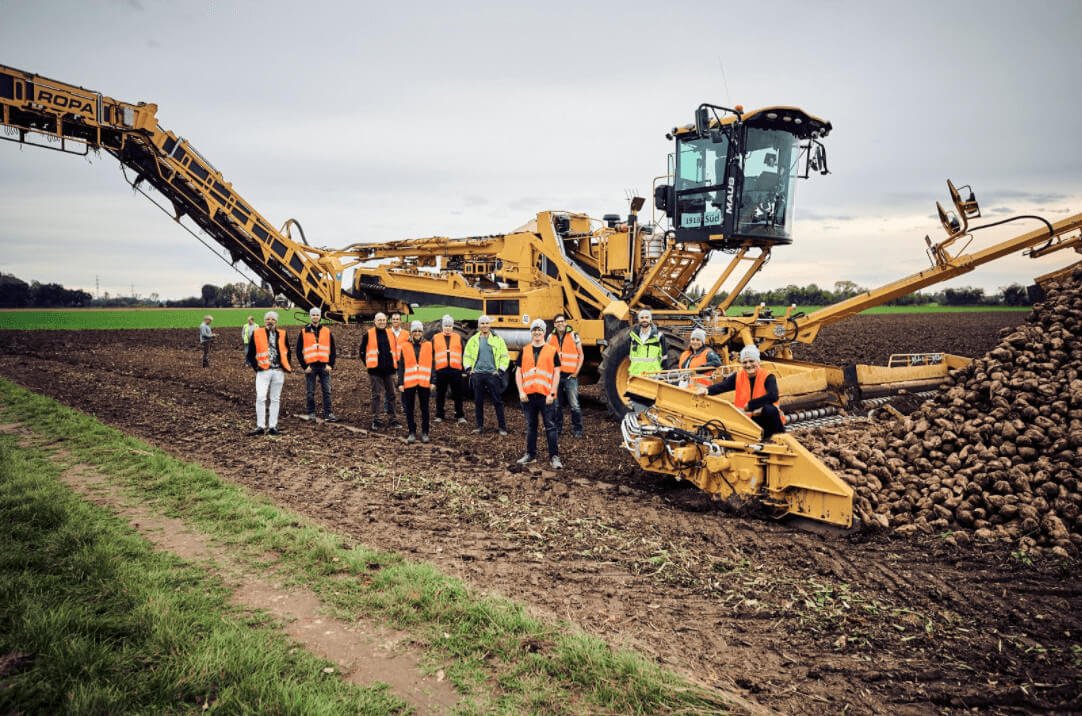 The German sugar industry consists of a wide-ranging network of sugar beet growers, suppliers, refineries, and processing companies. In each case, the individual sugar manufacturer coordinates the participants involved in the sugar production process. As the largest sugar manufacturer in Germany, Südzucker recognized the potential for digitising the delivery processes and thus ensuring greater transparency for its growers. With inovex’s assistance, an app solution which both met these requirements and provided a central information platform was created – in just six months.

Each season, sugar beet growers conclude contracts with Südzucker for the cultivation and supply of sugar beet. They buy the seeds from Südzucker and plant them. After harvesting, the sugar beet is picked up, weighed, and analysed – and ultimately paid for accordingly. Particularly during the sugar beet processing season, a great deal of information is both generated and shared between the beet processors and growers. The project’s aim was to create a digital solution to quickly organize this data into a manageable form in order to conserve resources and improve collaboration.
Firstly, inovex hosted an initial product workshop at which this vision was refined and a common goal developed. The two companies decided to create an app which would provide sugar beet farmers with details of their contracts and obligations, as well as improve their communication and collaboration with Südzucker. 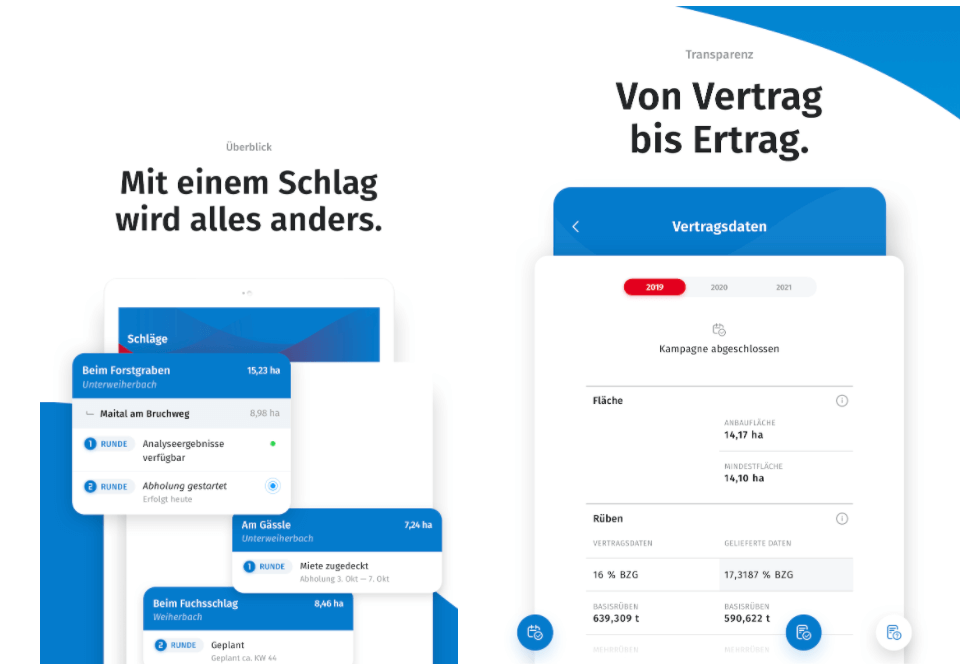 All the relevant information in a single app 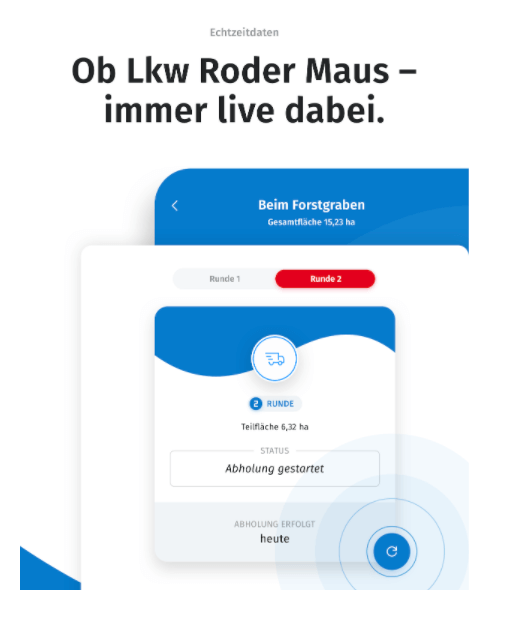 Once the objective had been defined, personas were created which reflected the needs of the majority of growers, and an app was designed around them. Working in partnership with Südzucker, inovex took on the development and delivered the design.

The app provides growers with an overview of all the relevant contractual data, as well as important information about upcoming key dates, such as the collection date for each grower’s sugar beet. Push notifications also draw attention to updates on the different harvesting phases. Growers can use the app to find out when their sugar beet is scheduled to be collected and when the lorries will call at the various fields.

Once the beets have been picked up, the growers also receive information about the weight of their harvests – with and without the excess soil. After lab testing has been completed, the app also provides information on the beets’ sugar content. All the information, including the contract data, is provided extremely precisely, right down to lorryload level. The app therefore gives each grower a transparent, at-a-glance overview of their yield.

The app has, however, been designed to be more than a processing platform for data on beet deliveries. Instead, inovex and Südzucker have also created an information platform which provides growers with news. Until recently, all information was communicated via a publicly available website. inovex set up a confidential communications inbox within the new app for sharing all kinds of news about sugar beet cultivation. This news portal connects all major cultivation associations and organisations, including Südzucker’s soil research subsidiary, Bodengesundheitdienst GmbH. This enables growers to keep up to date and functions as a central hub for information pertaining to sugar beet cultivation. 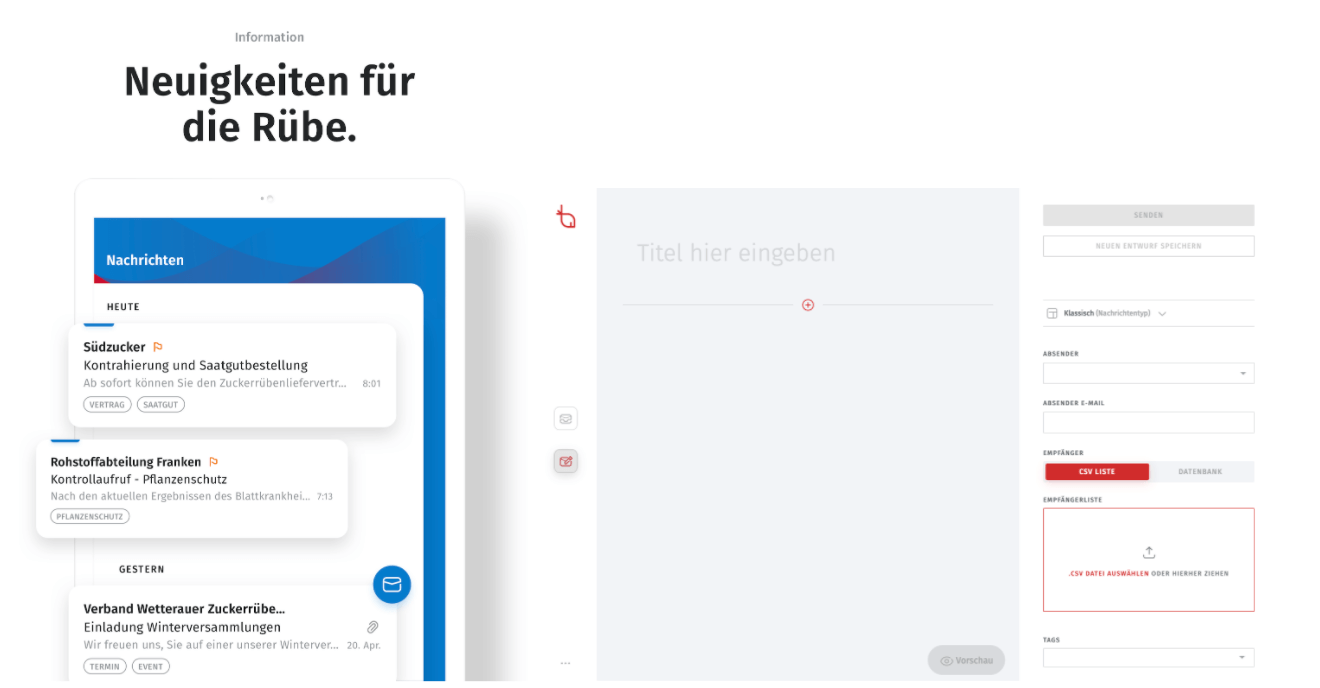 Südzucker wanted a solution which, like its previous system, used Microsoft and could be implemented on all mobile devices. Azure was therefore used for the cloud components, and the app was ultimately developed using Flutter. Although Flutter is noted for being compatible with both operating systems, its deployment at the expert hands of inovex’s iOS and Android specialists meant that the companies saved additional development time and ensured that the app worked perfectly on smartphones and tablets running both systems.

Agile development methods were the natural option for quickly creating a functioning prototype which could be worked on collaboratively. Südzucker welcomed this approach. Although the company had little previous experience using agile working methods and work was carried out completely remotely due to the COVID-19 pandemic, inovex and Südzucker were able to create a productive and cooperative working environment.

Ultimately, inovex’s designers, developers, and scrum masters worked with two product owners and two developers from Südzucker to launch a successful app in less than six months. Just a few days after its launch, the app was already being used by more than a third of its potential audience to plan the 2020 sugar beet harvests and deliveries.

Feedback from the growers is consistently positive and new ideas are already emerging.

As one of Südzucker’s sugar beet growers, I’ve naturally tested the new beet2go app. So far, it’s made a good impression. The app is lean and displays the relevant facts quickly and clearly. Right now, for example – the sugar beet harvester is currently working on my field – I can send a screenshot. The blue dot indicates the harvester’s location. The dot even blinks when you view it in the app. It certainly feels very high-tech.